Filming in Greece: Torn between the despair of a recent crisis and astonishing natural wonders

Hop on this time capsule called «HELLAS» (The original name for Greece) and take the ride of your life.

A mirror of a glorious past, a rocky present and of an uncertain future.

Fall in love not only with the breathtaking natural beauties of this country, but also with the traditions, the people, their generosity, their ideas and their courage.

Should you need 21st century hipsters, straight from the 1950’s traditional Cretan guy wearing his stivania (Traditional long Cretan boots usually worn by shepherds and workmen)  and his vraka (Baggy trousers) ,  a priest milking goats and making the yummiest feta cheese in mainland Greece or a 90-year old beekeeper who can party all night, you got’em.

Why not explore the Oriental side of Greece and film with the Muslim community up north?

Looking for some fun action?

How about a day- long flour smudging of chaotic childishness?

What do you say about a fire-walking ritual, a fire jumping festival or a mind blowing rocket war experience?

Of course it’s not only about the image.

What is even more captivating is what people have to say here.

Greeks are known to be very well opinionated and that is why, straight from their home cities, you can find them downtown Athens in Syntagma square protesting, acting and reacting to the current political and economic fluctuations. Because we don’t take democracy for granted! We work hard for it!

Because no image is strong enough if it’s void of content, it is the best place for filming any political or socio economic driven piece.

Walk around downtown Athens and take a look at all the graffiti. Political, social, sometimes incomprehensible slogans but, overall the proof that Greeks are active fighters who express their dispute with the state or how the Greek crisis has been handled so far. This country is an open gallery with artistic expressions of Gods and heroes dating from thousands of years ago to 2016’s European Union’s austerity measures policies.

Monuments and greek temples were meant to be worshipped centuries ago, but no doubt will be worshipped by your camera. And this heritage is now standing right next to abandoned but beautiful neo-classical buildings, a proof that a simple travelling shot can be a journey through time.

Which brings us to today. These Greeks, who have suffered so much lately and who have trouble meeting every month’s ends, are the ones who will treat you endlessly: if you haven’t already consumed a sea of local alcohol, they are the ones who will bring you the best fish, tastiest lamb, freshest veggies only to make your filming experience the best culinary adventure.

And let’s not forget, while we are at it: they are the ones who will open their houses to you allow you to film for hours and make you feel like one of their own, just as they do with thousands of refugees when a whole continent has closed its borders. They are the ones who built an unprecedented solidarity network out of nothing. Because Greeks have psyche (Greek word for soul, mind, or spirit) , soul... a vertue very much needed nowadays.

It is no secret that Greece is the place of striking natural beauty and home of some of the greatest wonders of nature.

And to capture these with astonishing light makes the most beautiful colour palette ever.

If you want to film deep blue then let’s go shoot underwater dazzling lagoons or between islands in the Aegean sea.  If you think that you have seen crystal clear waters, then think again!

If you want a passionate shoot, summer sunsets will serve you with a whole range of reds! Be ready for your footage to spread some love! Which can be celebrated while filming the making of the finest red wines... and their immediate consumption at local festivals!

If green is your thing, then Alpine lakes, dramatic gorges, dense forests, steaming volcanoes (ok, not so green but still very... earthy) will seal the deal, dotted with traditional villages!

And if you think filming can take place only in summer... then you must be hibernating!

To sum things up: in Greece, what you see is what you get.

If Greeks are happy, then they party in tavernas or bouzoukia (Greek live music nightclubs)  till they drop.

If they’re angry, they protest and start riots.

One thing is for sure. This country and its people are not indifferent.

Despite all the turmoil surrounding them, this land is alive and kicking!

Both nature and Greeks are ready to get exposed exactly like they are.

And we all know that the most interesting thing ever to be caught on tape is nothing else but… the truth. And that is what filming in Greece offers.

Come and shoot life at its fullest! 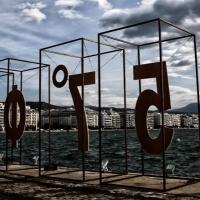 Join our mailing list to receive our latest news about our services and projects. Looking for a fixer in Greece? Leave it up to Eleni and her team and your filming experience in Greece will be second to none!

Fixer in Greece, was founded by Eleni Fanariotou, a producer and fixer with over 10 years of experience in facilitating international productions in Greece and abroad. Leave it up to Eleni and her team and your filming experience in Greece will be second to none! Photo shoots, films, news coverage, TV commercials , series or documentaries, music clips or corporate videos.